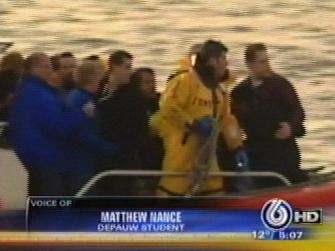 [Download Video: "WRTV Report on Student Rescuers" - 3216kb] "It was an experience they'll never forget," began a story within Indianapolis ABC affiliate WRTV's 5 p.m. newscast today. Matthew Nance and Megan Soultz, two young EMTs studying at DePauw, were there for the rescue" of passengers from US Airways Flight 1549 in New York's Hudson River yesterday "as part of their internship with the New York City Fire Department."

The piece by Dan Spehler includes phone interviews with Nance and Soultz,juniors who are spending Winter Term interning with John Freese, medical director for the fire department and 1996 DePauw graduate. Dr. Freese and the students were among the first responders to the scene yesterday. The plane crash landed in the river shortly after taking off from LaGuardia Airport.

"I will remember this for the rest of my life," Soultz tells the television station. "Our first emotion was really just shock that something like this was happening. 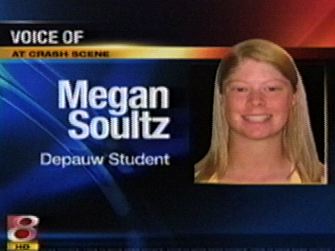 And then once we got there it turned to fear, slightly, just because we weren't sure where all of the patients were."

"There were a couple that were pretty shaken up emotionally," Nance tells Spehler.

"It was definitely a moment of relief knowing that all of the passengers had been accounted for," adds Soultz, while Nance tells WRTV, "It's just very humbling -- this large, catastrophic event I got to be part of, somehow ... I just followed through with the doctor that I'm out here with and did what I've been trained to do."

A brief summary of the piece can be accessed at IndyChannel.com.

Nance was also featured in a report on NBC affiliate WTHR, Soultz talked with CBS outlet WISH-TV, and both are quoted in this morning's Indianapolis Star.