In the men's game, Mike Moore lit up the Neal Fieldhouse scoreboard for 19 points, and two other Tigers scored in double figures. The visitors entered the contest ranked #8 in NCAA Division III. 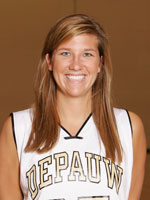 women's team with a double-double, logging 10 points and a career-high 20 rebounds. It was the team's thirteenth triumph in a row.

Summaries of the men's and women's games can also be found in today's Banner-Graphic.

For comprehensive coverage, visit the official athletics page of the Tigers.