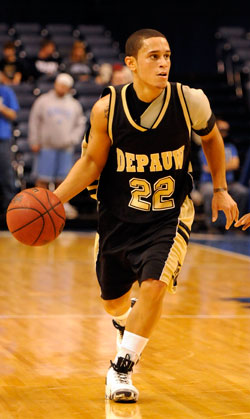 He scored 28 points in the Tigers' win over Oglethorpe, including 22 points in the first half on 8-of-14 shooting from beyond the arc. His fist three-pointer broke the DePauw career of 240 held by Alex Stewart (2002-06).

Moore scored 17 points and dished out eight assists in DePauw's win over Sewanee.

Moore averages 20.0 points, 4.0 rebounds and 3.4 assists per game and could become the first DePauw player to average 20 points per game since Jeff Bibbs did so during the 1979-80 season. His 500 points this year are already the most by a DePauw player in a season since Zach Phelps totaled 524 in 27 games during the 1993-94 campaign.

The Tigers return to action on Friday, February 27, when they face Southwestern in the opening round of the SCAC Championship. Tipoff is set for 3 p.m. CST. More details regarding live audio and live stats will be posted later.