Listen to the Game Live 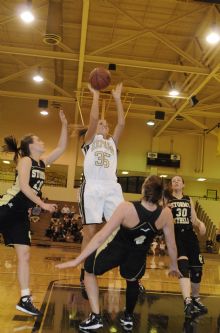 March 5, 2009, Greencastle, Ind. — "Despite an impressive 23-5 finish in the regular season, the ninth-ranked Blugolds won't have an easy game to open the NCAA Tournament," reports the Leader-Telegram of Eau Claire, Wisconsin, in a preview of Friday's first round Division III basketball tournament game. "Eau Claire's first match-up is with the 2007 National Champion, the DePauw University Tigers," notes the newspaper.

DePauw enters the tournament with a record of 22-5; the University of Wisconsin-Eau Claire is 23-5. The game will be played at Illinois Wesleyan University.

"I think we've been well-prepared throughout the season to face a good team like DePauw, " UWEC senior guard Heather Witt tells the newspaper. "We've had our own great competition here in the WIAC [Wisconsin Intercollegiate Athletic Conference], so I think we're going to be well-prepared and it should be a great game."

The appearance will be DePauw's sixth straight and 10th in the last 14 years. The Tigers have advanced to the national quarterfinals each of the last three seasons and claimed the 2007 Division III national title with a 55-52 win over Washington-St. Louis.

Friday's game tips off at 7 p.m. (Greencastle time) and can be heard live on DePauw's student radio station, WGRE (91.5 FM or via this link).

For the latest on DePauw women's basketball, visit the team's online page.