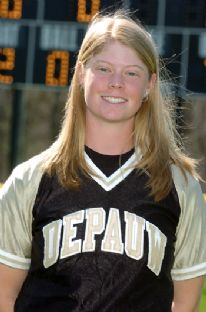 March 11, 2009, Greencastle, Ind. — DePauw junior Megan Soultz has been named the Southern Collegiate Athletic Conference Softball Pitcher of the Week. The honor covers games played from Monday, March 2 through Sunday, March 8, and is the seventh of her college career.

"Soultz went 4-0 over the weekend on the mound, pitching 23 innings allowing just 11 hits while striking out 26 batters," notes the SCAC's announcement. "Soultz did not allow a run in her 23 innings pitched posting a 0.00 ERA, giving up just two walks. On the weekend batters facing Soultz posted a batting average of just .136. Soultz pitched a pair of two-hitters against Eureka and Maryville (Tenn.), a three-hitter against Maryville and a four-hitter against Piedmont."

During her Winter Term this January, she helped with the rescue of passengers from US Airways Flight 1549 in New York's Hudson River.

DePauw returns to action Saturday and Sunday, March 14-15, at the Sea Gull Invitational at Salisbury University in Salisbury, Maryland. Get the latest at the softball team's Web page.