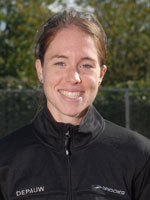 March 12, 2009, Greencastle, Ind. —  DePauw junior Lauren Reich heads to this weekend's NCAA Division III Track and Field Championships with the seventh-fastest time among those competing in the mile run.

The 2009 Championships are hosted by Rose-Hulman Institute of Technology on March 13-14. Reich is scheduled to run in the second heat of the event which starts at 4 p.m. on Friday. Finals are Saturday at 2 p.m.

Reich qualified for the Championships with a school-record time of 4:58.33 which she established at Purdue's Boilermaker Invitational on February 21.