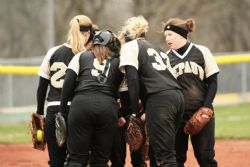 February 10, 2009, Greencastle, Ind. —  Coming off a 40-4 season and with starters back at every position, the Tigers head into the 2009 campaign ranked near the top of two national  polls.

The Tigers' 2009 schedule includes games against six other schools ranked in the NFCA Top 25. DePauw opens the season on February 28 in a tournament at Danville, Kentucky.