Two Juniors are SCAC's 'Pitchers of the Week' 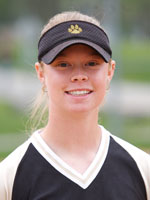 April 15, 2009, Greencastle, Ind. — Two DePauw University juniors -- Megan Soultz and Brad Gerlach -- are being honored by the Southern Collegiate Athletic Conference as "Pitchers of the Week" in softball and baseball, respectively. The award covers games played between April 6 - 12.

"Soultz [pictured above] went a perfect 4-0 last week in as many starts throwing 24 innings allowing just 15 hits and four walks posting a 2.04 ERA," notes the announcement. "In a huge one versus two match-up in the Eastern division against Rhodes, Soultz held the Lynx to hitting just .179 against her over the weekend. (She) struck out 22 batters over the series which included a complete game, two-hit shutout in the third game of the weekend which was the 30th of her career." The honor was the third for Soultz this year and the 10th of her career.

over Centre," reports the SCAC. "He tied a career high with nine strikeouts, walked two, scattered seven hits and posted a 1.00 WHIP. Gerlach allowed just one earned run for the second straight game."

To learn more, visit the SCAC online or click here for the official online home of DePauw athletics.