April 27, 2009, Greencastle, Ind. — "Public knowledge of what constitutes a 'green building' has been growing at a gratifyingly rapid pace," writes David Forsell in the Indianapolis Star. Forsell, president of Keep Indianapolis Beautiful and 1989 graduate of DePauw University, teams with Mary McConnell, who heads the Indiana chapter of the Nature Conservancy, on an op-ed. Forsell's organization recently moved into a renovated building and has applied to the U.S. Green Building Council for "gold" certification; the Nature Conservancy just broke ground on a new, environmentally-friendly building.

"The good news is that in today's economy you can build green for about the same price per square foot as a brown building," the two write. "In fact, Keep Indianapolis Beautiful saw only about a 4 percent premium in the cost of constructing a green headquarters in 2008. The even better news is that a green building becomes the investment that pays a myriad of dividends for your organization, for our city and for our planet." 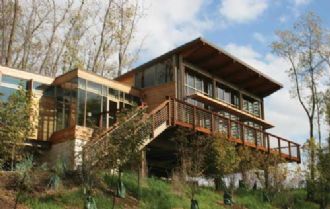 Gold certification from the U.S. Green Building Council. The adjacent Janet Prindle Institute for Ethics became the state's first LEED-New Construction Gold building last spring. DePauw is now the only institution in Indiana with more than one LEED Gold building.

On September 15, 2008, DePauw President Brian W. Casey signed the American College & University Presidents Climate Commitment, joining 575 college and university presidents and chancellors across America who are pledging to neutralize the greenhouse gas emissions of their institutions and make environmental awareness a key component of campus life.