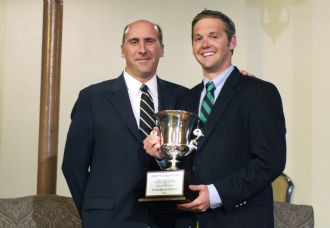 [Download Video: "2009 Walker Cup Presented" - 2553kb] Matthew R. Jennings, a DePauw University senior from Sylvania Township, Ohio, is the 2009 recipient of the Walker Cup. Named for 1890 DePauw graduate Guy Morrison Walker, the award recognizes the senior student judged to have contributed the most to the University during his or her four-year college career. It was presented tonight during DePauw's academic awards convocation, which was held in Meharry Hall of historic East College. (top photo: President Brian W. Casey with Matt Jennings tonight)

Three finalists for the award are selected by the votes of their classmates. The faculty chairs of DePauw's academic departments then review the resumes of the finalists and select the winner. The other finalists -- Matt Newill and Missy Orr -- were also recognized tonight.

Per tradition, the Walker Cup recipient will speak at DePauw's commencement, Sunday, May 17.

Jennings is an Honor Scholar who is double majoring in French and political science. As DePauw's student body president, Jennings helped establish the Student Senate to ensure that all students are represented in DePauw student government and have an avenue to voice their 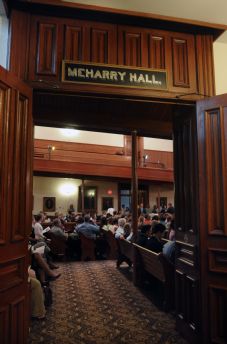 concerns. He served both as a mentor and peer mentor for the first-year experience program, served in a variety of editorial positions for The DePauw, and has served both as both the philanthropy and recruitment chairs for his fraternity, Sigma Chi. He is also a member of DePauwCapella, Mortar Board, and Pi Sigma Alpha, the national political science honor society.

On a Winter Term In Service Trip to Cameroon, West Africa, Jennings taught fifth graders and worked as a member of a construction team, and he studied abroad last spring at University of Paris X: Nanterre. After graduation, Matt Jennings will be teach high school English in Houston, Texas, through Teach For America.

Students, faculty and parents who filled Meharry Hall of historic East College tonight also heard from the two winners of this year's Exemplary Teaching Award, Matthew Oware and Barbara Steinson. The award is given jointly by DePauw University and the General Board of Higher Education of the United Methodist Church through the support of the George and Virginia Crane Distinguished Teaching Award Fund.

A PDF of the program with a complete listing of tonight's award winners can be accessed by clicking here.