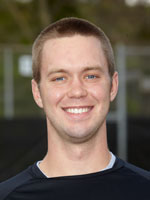 Senior Scott Swanson (left), the Tigers' number-one singles player, picked up three first-place votes and totaled 76 points to rank second in the all-conference voting. He posted an 18-9 singles record this year and was 21-7 in doubles. Over the course of his career he finished with a 76-34 singles mark and was 95-32 in doubles play.

Junior Scott Sandager played primarily number-two singles for DePauw this year and was fifth on the all-conference team with 59 points including two first-place votes. Sandager recorded a 14-9 overall mark while posting a 17-9 doubles record. In his three seasons, he's 42-19 in singles and 61-20 in doubles. 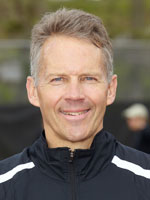 Senior Bryan Heck was ninth in the all-conference voting with 28 points after playing fourth singles and first doubles this year. He finished with a 15-4 singles mark and an 18-9 doubles record. In his four-year career, Heck finished 86-13 in singles and 87-27 in doubles play.

For the third straight year and sixth time in 11 seasons of SCAC competition, DePauw's Tom Cath was named the conference's coach of the year. He led the Tigers to a 22-4 mark which equaled the school record for wins in a season and DePauw made its 11th straight NCAA tournament appearance. Cath, who in February, announced his plans to leave the University, finished his career with a 374-165 record in 24 seasons.