Women's Golfers Tied for Third after First Round of NCAA Championships 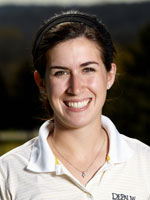 May 13, 2009, Port St. Lucie, Fla. —  The 11th-ranked Tigers shot an opening round 321 and are tied for third following the first of four rounds of the NCAA Division III Women's Golf Championships at the PGA Golf Club.

Wisconsin-Eau Claire leads with a 312, while St. Lawrence is second at 318. DePauw is tied for third with nine-time defending champion Methodist.

The Tigers are making their eighth straight NCAA appearance and have finished in the top four each of the previous seven seasons including second in 2007 and 2008.