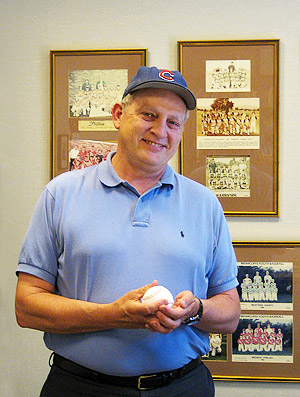 Incoming first-year students enrolled in Professor David A. Bohmer's seminar course, Baseball As History, have, to put it in related terms, hit a home-run in regard to course registration. A 1969 DePauw graduate, Bohmer is Director of DePauw's Eugene S. Pulliam Center for Contemporary Media and the Media Fellows Program, but this fall, he will be wearing a new hat – that of a first-year adviser and seminar professor. Though he may be new to conducting a first-year seminar (FYS), Bohmer is by no means a rookie when it comes to teaching. Throughout his 15 years at DePauw, he has taught several courses, including Baseball As History as a Winter Term offering.

DePauw's campus is filled with individuals – students and faculty members alike – who are passionate about a wide variety of subjects and interests; Bohmer is no exception. A history buff, he has several degrees in the subject, including an M.A. and Ph.D. from the University of Michigan. These days, Bohmer focuses his historical studies on baseball, a subject about which he is both passionate and knowledgeable, though he's not sure where the interest originated.

"My Dad loved tennis," he shares, "but he took me to some baseball games when I was young and he taught me how to keep score and about the father-son rituals associated with the game. We talked a bit about baseball, but not too much."

Looking back, Bohmer realizes that the thing he'd most like to ask his late father is a question about baseball.

"If I could ask him a question now, it would be ‘How did he feel when the Indians - then the Naps - sent Shoeless Joe to the White Sox?' My childhood ended Easter Sunday of 1960 when I learned that the Indians had traded Rocky Colavito away. He was my childhood idol for Cleveland, and I know that my Dad had mentioned Shoeless Joe was the player he looked up to."

Bohmer says his interest in the historical aspects of baseball evolved when he was recruited to assist with a Winter Term baseball clinic several years ago. It was his responsibility to develop and execute the academic component of a work-out class. His portion of the course then morphed into a Winter Term offering about baseball history, which he's since taught seven times. It was the preparatory research and discussions held in the class that led him to realize the extent of baseball's importance throughout history.

"One of the most interesting things about baseball is that there were many periods of time when baseball reflected and tied into American history," he notes. "There are a couple of times when it has been out in front of American history and a few times when it has been behind. In the case of Jackie Robinson and integration, it was ahead of the curve – one of those unusual times that it was. In the case of labor relations, it was behind the curve. Once the players' association hit in the 1970s, the game was torn with labor strife for virtually 20 years."

Bohmer has pursued individual research about baseball history that has resulted in the publication of two articles and the opportunity to present his work at the National Baseball Hall of Fame in Cooperstown, N.Y., for the Cooperstown Symposium on Baseball and American Culture. Last year he spoke about Ford C. Frick, a 1915 DePauw graduate, former National League president and the third baseball commissioner from 1951-65. Most recently, he presented about how the Federal League – which only lasted two years – influenced the shaping of baseball history, and next year he plans to present a paper on William Hulbert, who Bohmer thinks should be credited with founding the National League. His research on Halpern will also be featured in one chapter of his current project – a book on baseball history. The book will focus on nine men who never played baseball but have made the game what it is today.

This summer, Bohmer hopes to complete the research and writing of the book's final chapters and send the manuscript to some publishing contacts for edits. He also plans to prepare his syllabus for Baseball As History and, of course, cheer for his beloved Cleveland Indians and Chicago Cubs. As much as he enjoys summer, however, Bohmer is very excited to start working with the incoming class.

Reflecting on his career up to this point, Bohmer admits it has been full of surprises.

"If somebody had told me that I'd morph from a historian into a baseball historian, I would've never dreamed that possible. It's been a lot of fun to do."