July 4, 2009, Greencastle, Ind. — DePauw University is ranked #19 in the nation among Division III football programs in the USA Today Sports Weekly 2009 College Football Special Edition, which is available on newsstands now. The Tigers are the top-ranked Southern Collegiate Athletic Conference team (Trinity is #20) and DePauw is the only Indiana college listed in the top 25.

The publication also cites DePauw senior quarterback Spud Dick as one of four Division III "Players to Watch." The text states that Dick "threw for 2,896 yards in 10 games last year as a junior, just missing the playoffs after upsetting Wabash in the annual Monon Bell game." 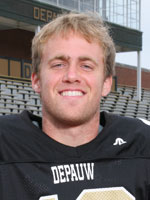 The preseason poll is led by No. 1 Mount Union College, the defending national champion, followed by national finalist University of Wisconsin-Whitewater at #2.

The Tigers have 17 returning starters (7 on offense, 8 on defense, 2 kickers) and lost 7 starters to graduation in May. The 2009 squad includes 43 returning lettermen, including the program's all-time leading passer, senior quarterback Spud Dick.

The season opens September 12 at Anderson.

Copies of the two-DVD set of the 2008 Monon Bell Classic are still available. The package includes the entire 115th battle between DePauw and Wabash College as well as a complete set of "Monon Memories" dating back to the rivalry's origins in 1890. Details can be found in this story, or access an online order form. 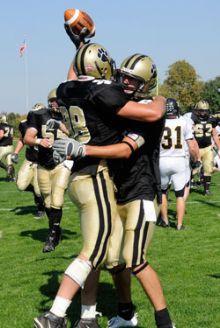