August 4, 2009, Greencastle, Ind. — DePauw University's football team is ranked #25 in the nation in the preseason D3football.com poll. DePauw totaled 98 points in making its first appearance in the rankings, which started in 2003 and are the result of voting by 25 coaches, sports information directors and media representatives.

DePauw is ranked #19 in the nation among Division III football 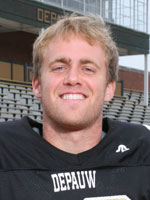 programs in the USA Today Sports Weekly 2009 College Football Special Edition, which also lists Spud Dick (pictured at right) as one of the nation's four "Players to Watch" during the coming season.

The Sporting News 2009 College Football Yearbook lists DePauw as a "team to watch."

The season opens September 12 at Anderson.