As the Neutron Spins 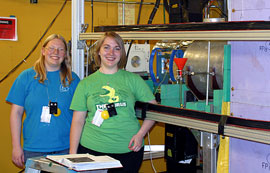 For a second consecutive summer, Associate Professor of Physics and Astronomy Alexander K. Komives traveled with DePauw students to Los Alamos National Laboratory's Neutron Science Center (LANSCE) in New Mexico. They are collaborating with a team of international researchers to investigate what physicists call the weak interaction, one of the four fundamental forces in the universe. Of these forces, most people are familiar with gravity and electromagnetism, which keep our feet on the ground and our music in our iPods, respectively. The weak interaction is quietly responsible for a type of radioactive decay in which a particle can spontaneously change from one type to another. In unscientific terms: it keeps our Sun lit. What many physicists find most interesting about the weak interaction, however, is that it breaks an old rule in physics.

Sub-atomic particles—protons, neutrons and so forth—behave as if they're spinning like a top, rotating to the left or right. Until the 1950s, physicists believed that an experiment involving any of the fundamental forces could be reproduced symmetrically. In their eyes, right-spinning particles were otherwise no different from their left-spinning sisters.

But processes involving the weak interaction were found to be a curious exception to this rule. During a particle's decay, small bits of energy are released. The direction that the energy shoots out is influenced by the spin of the original particle, thus breaking symmetry. Because of this, two experiments involving the weak interaction, set up in the exact same way, can produce entirely different results.

Komives' team wants to test a theory that describes the degree to which a particle's spin influences this violation of symmetry. In experiment form, that means they must first isolate like-spinning particles in order to get consistent results.

"But there's a problem," says Komives (right). The particles—neutrons in this case—have a tendency to bounce around as they enter the testing device. "When a neutron bounces, it can reverse its spin. If a significant number of neutrons lose their preferred direction, you'll get imprecise results."

Science at this level operates at a deliberate pace. Before Komives' team tests the symmetry theory, they've been trying to find out whether or not the bounce effect will render that experiment impossible. Most of their first test in 2008 was spent setting up and calibrating the test apparatus that his team designed to interface with LANSCE's neutron beam equipment. "We've got several pieces of equipment that need to be put together and function reliably for three to four weeks," Komives explains. This summer, with less time needed to calibrate the equipment, the team was able to focus on collecting data. Those results may bring them a step closer to their goal. At the very least, the team will soon know what next summer holds in store.

The team's return trip was a remarkable accomplishment in and of itself, considering the procedural obstacle course that a researcher must navigate to use the LANSCE facility.

"Anybody is allowed to make a proposal to use the facility, but it isn't an easy process - it's intense," Komives says. "You have to write a document that explains how you want to use the facility and why your research is important. Then you have to go to Los Alamos to defend your proposal in front of a review panel. You only have about 12 minutes to answer the panel's questions and address its concerns. I had to go through the entire proposal process again this year, and I asked for more time."

While Komives has spent much of his life pursuing this line of research, the students who've accompanied him are just getting their feet wet. For Kaitrin A. Higbee ‘12, Michelle N. Whitehead ‘11 and Shelby Vorndran '10, who joined Komives last year, Los Alamos was a memorable introduction to advanced physics research. 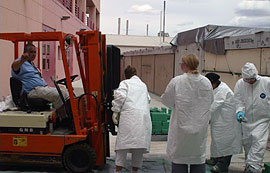 "[LANSCE] was the sort of lab that I had always wanted to work at when I was taking physics in high school, but I had never thought that I would end up in Los Alamos as a freshman," says Higbee, who just finished her first summer as a college student. "Our own collaboration is made up of people from five different countries, all brought together by this single experiment. There stops being such a dichotomy of who's who based on silly things such as gender and race - regardless of those things, people learn from each other. Professor Komives, Michelle and I know quite a bit about data acquisition for a specific instrument, and others learned from us about how to troubleshoot and run that particular device. At the same time, we became students when we needed to learn how to run the lasers."

"That's not so say our collaboration is perfect," Whitehead says. "As a general rule, physicists are interesting characters, and our group was no exception. There have been times when I've really wanted to get my hands on the security videos from our area and send them to America's Funniest Home Videos. We would definitely win the $10,000 prize."

Those moments of levity, Whitehead says, defy the facility's austere reputation. "The lab itself was built right out of the desert as a secret research facility for creating atomic weapons in the 1940s. It now has more than 50 different complexes, each with its own facilities, research goals and security. The building we worked in was rather low security, but next door is the Weapons Neutron Research Facility, so we get to go through a gate with armed guards every morning. It's a beautiful town with a lot of secrets."

"There's a firing range not too far from where we were doing our experiment, and we'd hear them as we were working," Komives adds. "You're always aware that Los Alamos isn't a run-of-the-mill place."

The Los Alamos lab complex and its surrounding town span multiple finger-like mesas more than 7,000 feet above sea level. New Mexico's open skies set the stage for dramatic thunderstorms that punctuate the work done by researchers below. Higbee says that the stark contrast between nature and high-tech facility leaves an impression.

"I loved the environment, whether we were in the lab or outside," she says. "The lab's location in the foothills of these looming mountains that makes it feel as if it's cradled by them. It seems strange that nature would permit something so modern looking to stay out there for very long."