September 30, 2009, Greencastle, Ind. — "Strengthening Congress makes a clear and compelling case for why we need a strong, vibrant, and assertive Congress, where it needs change and reform, and how to provide the changes needed," says Norman J. Ornstein, resident scholar at the American Enterprise Institute of the new book by Lee H. Hamilton. Ornstein says Hamilton, who served 34 years in the U.S. House of Representatives and is a 1952 graduate of DePauw University, offers "a welcome roadmap to help strengthen oversight, deliberation, ethics, and legislating inside Congress and to reform the role of loybbyists and citizens outside Congress."

Adds the Los Angeles Times' Janet Hook, "Lee Hamilton is a truly rare breed. He is a wise man who knows Congress inside out -- and can still think constructively about its strengths and weaknesses. His book provides a clear and well-informed view of how the country would benefit from a stronger Congress."

Thomas E. Mann, co-author of The Broken Branch, asserts, "Lee Hamilton, one of this country's greatest public servants ever, has written a new book that challenges Congress to revitalize its special place in the American constitutional system and exhorts citizens to engage this institution to realize the promise of our representative democracy. Strengthening Congress is both a constructive critique of the broken branch and a compelling call to arms for politicians and citizens alike to repair it." (at right: Hamilton in Meharry Hall of DePauw's historic East College)

In Strengthening Congress, published by Indiana University Press, Hamilton "argues that America needs a stronger Congress and a more engaged citizenry in order to ensure responsive and effective democracy," according to a synopsis of the title. "Hamilton explains how Congress has drifted away from the role envisioned for it in the Constitution as a body whose power and influence would be preeminent in the American system of government. He details the steps that Congress should take to re-establish its parity with the executive branch and become an institution that works reliably and effectively for the betterment of the nation -- reinforce congressional oversight, restore the deliberative process, curb the influence of lobbyists, and reduce excessive partisanship. Concurrently, Hamilton calls upon Americans to take more seriously their obligations and responsibilities as citizens and engage with the critical issues facing their communities and the nation." 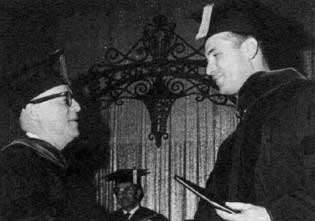 A Democrat, Lee Hamilton co-chaired the 9/11 Commission and the Iraq Study Group. He is president and director of the Woodrow Wilson International Center for Scholars, is director of the Center on Congress at Indiana University, and is co-chairing the new National Security Preparedness Group. He authored the 2004 book, How Congress Works and Why You Should Care.

Newsweek has called Lee Hamilton "Mr. Integrity," while the New York Times' David Brooks opined, "The country is hungering for leaders like him: open-minded, unassuming centrists who are interested in government more than politics." Read more about him in this recent article.