"You can't," asserts Dudley, professor emeritus of mathematics at DePauw. "You can't because it's been proved you can't. Pierre Wantzel, in 1837, proved you can't trisect an angle with a simple compass and straightedge. That's the beautiful thing about math; once it's proven, it cannot change. Ever. That's why people study math. The Pythagorean Theorem was absolutely true, remains so today, and will be true forever." 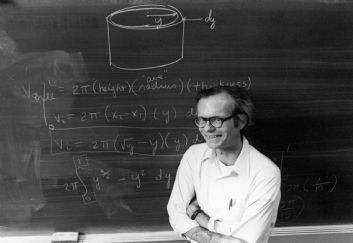 In his lecture, Professor Dudley urged his audience, "If you leave this university and go out and teach geometry, don't ever, ever bring up the fact that angles cannot be trisected using a compass and straightedge. Because invariably, one of your students will make it their life's work. Which is ridiculous, because no one will ever be able to prove that the sum of two even numbers equals an odd number."

Read the complete story -- "Don't talk to those trisectors" -- at the newspaper's Web site.

Woody Dudley is the author of Numerology: Or, What Pythagoras Wrought, Is Mathematics Inevitable? A Miscellany, The Trisectors and Mathematical Cranks, which drew the attention of the Chronicle of Higher Education in August 2008. The professor was quoted in a March National Geographic piece which examined the fact that 2009's calendar include three Friday the 13ths.