October 16, 2009, Greencastle, Ind. — Tickets will be made available for the 116th Monon Bell Classic -- between DePauw University and Wabash College, to be played at Blackstock Stadium on November 14 -- later this month, Page Cotton, director of athletics at DePauw announced today.

During a two-day period (October 26 & 27) DePauw students, faculty and staff can pick up their complimentary 2009 Monon Bell 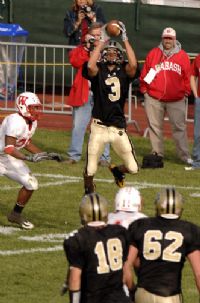 game tickets in the Office of Student Life in room 210 of the Memorial Student Union Building. By showing their valid I.D., current students may pick up one ticket, while faculty and staff will be allowed no more than two each. During these two days there will be no cash purchases available.

Wednesday, October 28, is the first day for the sale of tickets. The $15 tickets may be purchased with a credit card through this link, which is also posted on the Monon Bell page. There will be a $1 per order shipping and handling fee and a maximum purchase of eight tickets per order.

For those without Internet access, tickets may also be purchased by calling the Office of Student Life at (765) 658-4199 or, in person, in room 210 of the Memorial Student Union Building. All sales, including those online, will be conducted between the hours of 8:30 a.m. through 4:30 p.m. Eastern Daylight Time. Complimentary tickets may also be picked up during this time, but are subject to availability.

DePauw alumni are also invited to purchase a $30 package which includes a pre-game brunch at Walden Inn and a game ticket. Details can be found here.

All tickets sold at DePauw (gold tickets) are for seating on the DePauw side only and there will be no will call at the stadium.

"The Monon Bell game continues to be an incredibly popular event," Cotton says. "If fans want a ticket they need to make sure they obtain them early as the game will sell out quickly."

Kickoff for the 116th meeting between the two schools and the 78th for possession of the Monon Bell is set for just after 1 p.m. on Saturday, November

14 at Blackstock Stadium. Gates open at 11:30 a.m. and the Blackstock parking lot will open to the public at 9 a.m. There will be a $5 fee for parking in the Blackstock lot. Complete parking and tailgating information is available here.

This year's game will again be telecast across America on the high definition network HDNet with telecast parties arranged by DePauw and Wabash alumni in over 60 cities.

Pre-orders are being accepted for the limited edition DVD of the 116th Monon Bell Classic, and limited copies of the 2001-08 games remain available. The discs are professionally replicated and contain bonus materials. Details and an online order form can be found here.

Voted Indiana's "best sports rivalry" by visitors to ESPN.com, the Monon Bell Classic is one of the nation's longest and greatest football rivalries. The all-time series is tied 53-53-9, while DePauw leads in games played for the Monon Bell by a 37-34-6 count after last year's 36-14 win in Crawfordsville.

A complete roster of "Monon Memories" -- 115 video highlights of all the past games, which were featured last year in the Chronicle of Higher Education -- can be found here.