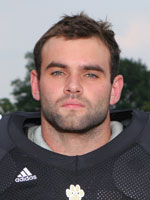 November 24, 2009, Greencastle, Ind. — DePauw University senior Alex Fitch, a defensive end on the Tiger football team, has been named to the ESPN The Magazine Academic All-America® College Division Football First Team as selected by the College Sports Information Directors of America (CoSIDA). Fitch was a second team selection last year and is the first DePauw student-athlete since 1991 to earn Academic All-America® honors in consecutive years.

An economics and mathematics double major, Fitch has a 3.97 cumulative grade point average. He is a member of DePauw's Management Fellows program and has been named to DePauw's dean's list every semester in addition to his three Southern Collegiate Athletic Conference Academic Honor Roll selections.

In addition to his normal course load, Fitch also takes one piano class each semester and plans to perform a junior recital this year. He also is a recipient of the Timothy Pearson Scholarship, the Stuart and Jane Watson Delta Tau Delta Scholarship and the Neal Scholarship. 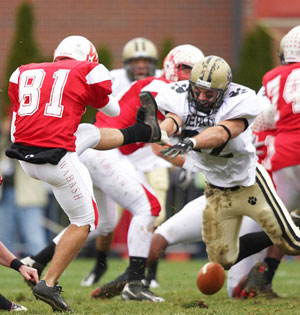 (at right: Fitch blocks a field goal early in the 2008 Monon Bell Classic)

A co-captain of the Tiger football squad, Fitch started all 10 games for the 7-3 team and totaled 19 tackles including a team-high 6.0 sacks. He also shared the team lead with 6.5 tackles for loss.

Fitch is DePauw's 41st Academic All-America selection and the 19th football player to earn the honor.

Read more at ESPN.com or at the official home of Tiger football.