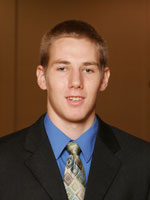 December 8, 2009, Greencastle, Ind. —  DePauw hit six of its first seven three-point attempts in jumping out to an 18-0 lead in the opening 4:08 and improved to 6-1 with a 92-70 win over visiting Purdue North Central at the Neal Fieldhouse. The Panthers dropped to 4-8 with the loss.

Sean Haseley (left) and Steve Lemasters each hit two threes while Ryan Russell and Ryan Sever added one each in the Tigers' opening run.

The Tigers took a 52-23 lead to the halftime break on the strength of 60.6 percent shooting from the floor including 12-of-30 from three-point range.

DePauw's biggest lead came at 80-48 with just over seven minutes remaining before the Panthers closed the game with an 8-0 run to trim the final margin to 22 points.

Haseley notched a career high with 19 points and hit 5-of-6 from three-point range, while Lemasters added 17 and Russell finished with 10. Sever finished with a career-high 11 rebounds as DePauw held a 44-29 advantage on the boards. Matt Bennett dished out five of the Tigers' 24 assists.

Jordan Delks paced the Panthers with 18 points followed by Ryan Sisson with 15 and Nathaniel Carroll with 13. Sisson hauled down five rebounds and Derrick Hazelwood dished out five assists.

The Tigers shot 50.8 percent for the game including 38.9 percent (14-36) from beyond the arc, while Purdue North Central hit 41 percent from the floor.

DePauw returns to action on Friday, December 11, when it travels to Wabash for a 7:30 p.m. contest.