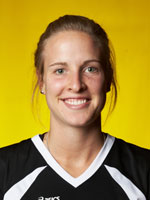 A first team all-Southern Collegiate Athletic Conference choice this year, Larson averaged a team-high 2.5 kills per set, She also led the team with a .295 hitting percentage.

Larson finished her career ranked ninth in school history with a .255 hitting percentage.

The Tigers finished the season with a 28-9 record this season and were fourth at the SCAC and third during the regular season.