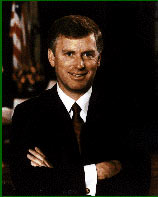 The DePauw University Band was also part of the festivities. Its sixty-nine members were invited to participate in the inaugural parade, and marched down Pennsylvania Avenue this afternoon.

Yesterday, the band played before about 9,000 people at an education forum, "Looking Forward," which was led by Quayle and included a surprise appearance by Bush.

Quayle, who served in both the U.S. House of Representatives and U.S. Senate, becomes the first DePauw alumnus to assume the vice presidency.

DePauw President Robert G. Bottoms attended the inauguration, as did Gerald Warren, professor emeritus of economics and management and former mayor of Greencastle, who had Quayle as a student. Many others from DePauw were on hand, as well, including the vice president's parents, James Quayle and Corinne Pulliam Quayle, both 1943 graduates of DePauw. A total of 117 members of the Quayle family attended the inaugural events.