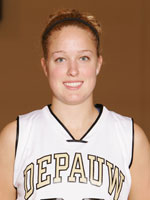 January 11, 2010, Greencastle, Ind. —  DePauw sophomore forward Katie Aldrich (Lexington, Ky./Lafayette) has been named the Southern Collegiate Athletic Conference Women's Basketball Player of the Week for her performances in DePauw's 99-64 win over Sewanee and its 81-54 victory over Oglethorpe.

On Friday against Sewanee Aldrich recorded 14 points, eight rebounds and two assists in just 16 minutes of play. In Sunday's win, she posted 23 points and 13 rebounds both of which are career highs and gave her the first double-double of her career.