February 6, 2010, Greencastle, Ind. — A feature in India Today, headlined "You're most likely to be happy if...," notes, "Adults who had the biggest grins in their college yearbook pictures were up to five times less likely to be divorced decades later than those who looked less happy, according to a new DePauw University study. A smiling person's positivity may rub off on a spouse."

The research in question was conducted by Matthew J. Hertenstein, associate professor of psychology at DePauw, along with Carrie A. Hansel, formerly research coordinator at DePauw's Emotion Lab and 1993 graduate of the University, and 2008 DePauw graduates Alissa M. Butts and Sarah N. 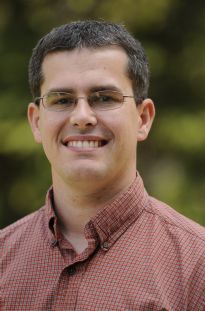 Hile, who were students of Dr. Hertenstein.

Their work received a flurry of international media attention since last April, with coverage in British media outlets, United Press International, Yahoo! and a piece which aired April 16, 2009 on NBC's Today. Indianapolis ABC affilate WRTV also came to campus to interview the professor, and the research on smiles was also covered by the Discovery Channel. The research was recently included in the New York Times Magazine's "Ninth Annual Year in Ideas."

Research conducted by Dr. Hertenstein and his students at DePauw has previously been featured in American Baby and Prevention magazines, on the Canadian Broadcasting Corporation's program, The Nature of Things, in Sunrise magazine and the Toronto Sun, and on National Public Radio.