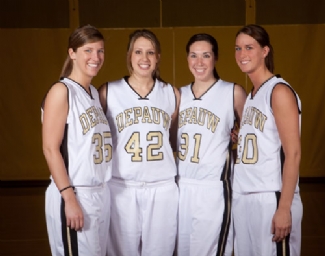 "The win, which improved DePauw's record to 22-3, was their 18th straight and it also extended their home winning streak to an astounding 49 consecutive games," notes the station. "They've also won 66 in a row at home (not including NCAA postseason) and 54 straight Southern Collegiate Athletic Conference games at Neal Fieldhouse."

The text accompanying the video clips adds, "For the seniors, Sunday's game was extra special. For the four who played in their final regular season home game, they finish with a 103-16 record during their careers, third-best among Division III schools during that span. In honor of WBCA Pink Zone Weekends, the DePauw team wore pink uniforms for the game against Birmingham-Southern. The uniforms were donated by Russell Athletic in recognition for DePauw's efforts leading the Division III among fundraising efforts in 2009."