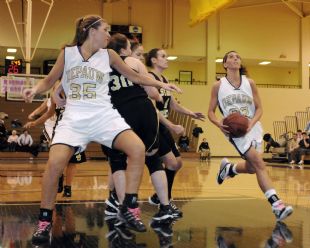 March 1, 2010, Greencastle, Ind. — "The Franklin College and DePauw University women's basketball teams each received bids to the NCAA Division III Tournament when pairings were announced today," reports the Indianapolis Star. "DePauw (25-3) earned its seventh consecutive bid by winning the Southern Collegiate Athletic Conference title," writes Michael Pointer. "The Tigers will play Lakeland (22-6) on Friday in Holland, Mich. The winner plays the winner of the Hope-Denison game in a second-round game on Saturday."

DePauw's appearance in the national tournament will be its 11th in the last 15 years. The Tigers won the 2007 national title, finished third in 2002 and advanced to the national quarterfinals in 2006 and 2008. DePauw is carrying a 21-game winning streak to the tournament.