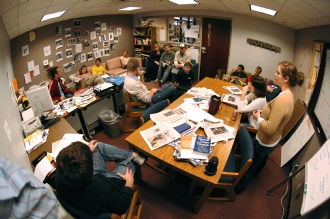 March 30, 2010, Greencastle, Ind. — Seventeen student journalists at DePauw University are the recipients of seven Region 5 "Mark of Excellence" awards from the Society of Professional Journalists. The contest, which received more than 3,600 entries, honors work which was printed or broadcast in 2009.  Region 5 includes Illinois, Indiana and Kentucky. (at left: students at work in The DePauw's newsroom)

The honorees were awarded certificates Saturday during the Region 5 SPJ Spring Conference held at Loyola University in Chicago. First place regional winners will advance to the national round of judging. National winners will be announced in mid-May.

Winning entries from Indiana's oldest student newspaper, The DePauw, are:

For a complete listing of award winners, click here. (above right: economist and SuperFreakomonics author Steven Levitt being interviewed for WGRE on November 30, 2009)

Founded at DePauw University in 1909, The Society of Professional Journalists is dedicated to improving and protecting journalism. It is the nation's most broad-based journalism organization, dedicated to encouraging the free practice of journalism and stimulating high standards of ethical behavior. SPJ promotes the free flow of information vital to a well-informed 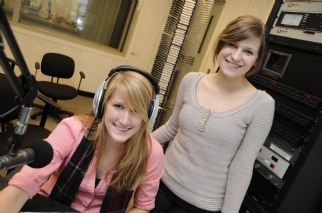 citizenry; works to inspire and educate the next generation of journalists; and protects First Amendment guarantees of freedom of speech and press.

A completely independent, student staffed and managed not-for-profit organization, The DePauw was founded in 1852 as Asbury Notes, reflecting the name of the University, then known as Indiana Asbury University. The oldest college newspaper in Indiana, The DePauw is published most Tuesdays and Fridays of the school year.

Putnam County's first radio station -- and one of the first non-commercial, educational operations in the United States -- WGRE signed on in 1949. Managed and run by nearly 150 DePauw students, the station operates 24 hours a day.