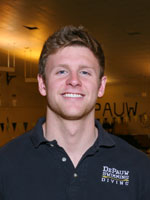 April 13, 2010, Greencastle, Ind. —  Based on exclusive voting by the head coaches of the Southern Collegiate Athletic Conference, DePauw senior John Cook has been named the conference's male Swimmer of the Year. The honor was his third straight recognition by the conference.

Cook finished first in two different individual events at the SCAC Championships (50 and 100-yard freestyle) earning NCAA “B” cut times in both events. He was also part of the Tigers’ all-conference performances in the 200, 400 and 800 free relays which each earned NCAA “B” cut times. The 200 free relay set an SCAC championship record. Cook also swam in the 200 medley relay which finished first with an SCAC championship record.

Cook served as team captain the past two years and totaled 25 first place finishes in 2009-10 while scoring 290 individual team points for the Tigers.