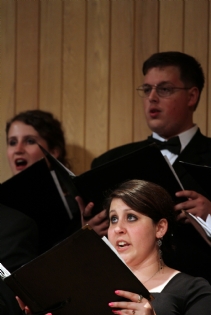 May 5, 2010, Greencastle, Ind. — The final work of the academic year for the DePauw University Combined Choirs and the University Orchestra will be Wolfgang Amadeus Mozart's Requiem. Also, on the program will be three orchestral selections from Berlioz's The Damnation of Faust. The works will be performed in a concert this Sunday, May 9, at 3 p.m. in Kresge Auditorium of the Judson and Joyce Green Center for the Performing Arts.

"Our purpose for the Berlioz was to have its bold and darker theatricality set the stage for the elegant presentation of the Requiem by Mozart," notes the director of the DePauw University Orchestra, Orcenith Smith. "Certainly, the legend of the scholar, Faust, who sold his soul to the devil, is played out in French composer, Hector Berlioz' dramatic cantata, The Damnation of Faust, written in 1846."

According to Professor Crouch (pictured at left), who will conduct the Mozart Requiem, "The story of the this work's creation, woven into the myths surrounding Mozart's death, is one of the most beguiling mysteries in the history of music. According to some sources, Mozart was approached by a stranger in August of 1791 who identified himself as a messenger who wished to commission a Requiem mass, 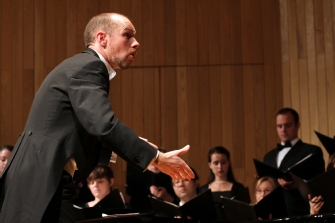 a mass for the dead. After the stranger left, Mozart was said to have gone into a trance-like state and began to write, but he died prior to the completion of the Requiem. Several scholars have 'finished' the requiem over the years, but we will perform the version commissioned by Mozart's widow from his young student Süssmayr."

Sunday's performance will be Crouch's final concert at DePauw. He was recently named director of choirs at Princeton University, a position he will assume in the fall.

Soloists for the Mozart will include Pamela Coburn (seen at right), a 1974 graduate of DePauw, who is the Distinguished Visiting Professor of Voice at DePauw University since 2005, having obtained her vocal education at DePauw's School of Music, the Eastman School of Music, and the Juilliard School. Since her striking successes at the Bavarian State Opera, she has been one of the leading international singers of her generation.

Mezzo-soprano Caroline Bradley Smith is the Cassel Grubb University Professor at DePauw, and has also held positions at the Indiana University Jacobs School of Music (visiting professor) and Wabash College. She holds a Bachelor of Music degree in vocal performance from Converse College and a Master of Music degree from Florida State University. Her compact disc Pipings and Song: A Musical Journey for the Spirit with organist Carla Edwards was released in Fall 2009.

Baritone Matthew Markham enjoys an active career on the operatic, concert, recital, and musical theater stages. He has performed in prestigious concert halls including the Rudolfinum in Prague and at Lincoln Center in New York City, and has received various honors, awards, and grants in the field of music. Markham holds the Doctor of Music and Bachelor of Music degree in performance from Florida State University and the Master of Music degree in performance and pedagogy from Westminster Choir College.

The Sunday performance is free and open to the public.