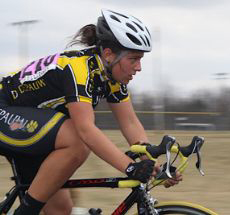 "Klofta posted a sixth-place finish in the road race Friday after posting a time of 3:30.02 and a time of 43:48.3 to finish third overall in Saturday's criterium," notes a report in today's Banner-Graphic."Klofta began her cycling career late in life, getting her first bike her junior year of high school, but since then, she's making up for lost time," writes Caine Gardner.

Kent Menzel, professor of communication and theatre and coach of DePauw's cycling team, tells the newspaper, "She became a bicycle racer two weeks before she participated in the Collegiate National Championships in San Diego and she place fifth in the individual pursuit. So, she won a medal in a national championship basically, let's say, three weeks into career as a bicycle racer and hasn't stopped since."