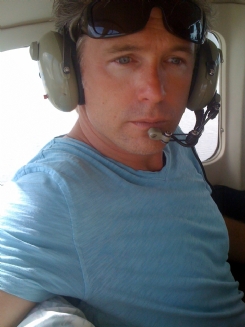 July 9, 2010, Greencastle, Ind. — "I've spent my adult life working for the ocean, the endangered animals living in it, and the people who depend on it," writes Wallace J. Nichols, marine biologist and 1989 graduate of DePauw University, in Santa Cruz Weekly. After an aerial tour of the oil ravaged Louisiana and Mississippi coasts, Dr. Nichols noted, "I've seen the wholesale destruction of species by commercial fishing, illegal hunting and the destruction caused by plastic pollution. But none of that prepared me for this."

Nichols, who goes by his middle initial, is a research associate with the California Academy of Sciences and founder/co-director of Ocean Revolution. He's on the Gulf Coast working to rescue sea turtles who have been affected by the disaster.

"Our plane surveyed a path of the thousands of square miles of destroyed ocean habitat," Nichols reports. "Then we descended a bit and flew over "ground zero", the site of the ill-fated Deepwater Horizon. A new platform has taken its place. A large flame of burning methane jetting from the side. Ships worked the waters all around. Bands of oil extended off into the distance, set off by the deep blue of the Gulf. We were close. So close I could smell it. The cockpit filled with fumes. I breathed in the foul breath of the fire dragon. We buzzed the beast, like a pesky fly. Our small craft banked, circled back 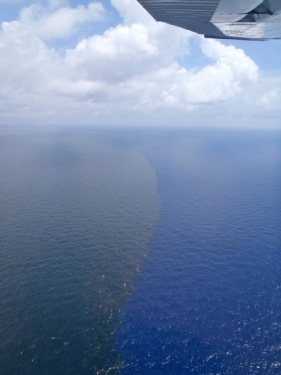 around for a closer look. This time I held my breath. I thought of the tragic loss of human lives that occurred just below me ten weeks prior. I thought of the massive loss of animal life that's already happened and will unfold throughout this ocean for years to come. I thought of the distraught fisherman who took his own life. I thought of the people below, working to stop the flow of oil, working to burn the oil on the surface. I thought about my daughters. I thought ten million other things at the same time. I felt like I was going to cry. Somehow I didn't, but I raged inside silently. Eventually, I could hold my breath no longer and I sucked in the breath of the fire dragon again." (above: photo by J. Nichols of oil and water from 1,000 feet)

The scientist and conservationist concludes, "I will think of the Deepwater Horizon every time I smell that smell. Every time I pump gas into my tank, or ride my bike behind a truck on a busy street. At airports and bus stops. At BP, Exxon, or Chevron stations. It will keep me going in this ocean revolution, our collective effort to slay the dragon." 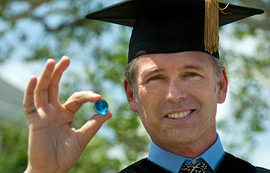 J. Nichols is responsible for pioneering research on the migration of sea turtles. His work has been featured in National Geographic, Scientific American, TIME and Newsweek, and he was seen in Leonardo DiCaprio's documentary, The 11th Hour. He returned to DePauw on May 23 to deliver the principal address to the University's Class of 2010, "You Are Lovers and Fighters."

Dr. Nichols  is a regular Huffington Post contributor and was featured on the cover of the June 2010 issue of Experience Life magazine. Learn more in this recent article.