July 27, 2010, Greencastle, Ind. — "It's a brave new world when journalists use sources like WikiLeaks," Andrea Mitchell reported on tonight's edition of the NBC Nightly News in a story about the release of about 90,000 secret U.S. military documents related to the American mission in Afghanistan. The memos were made public by WikiLeaks, a whistle-blower Web site, then picked up by mainstream media outlets, including the New York Times.

"It is a complicated, complex equation in this case," he tells NBC. "It really challenges the public to try and make sense of not only the documents but the process at play."

As Mitchell notes, "Everyone -- soldiers in the field to top national security officials -- are still trying to figure out if this is a game-changer, the release of so much raw intelligence on a Web site with a war in progress."

Video of the report is acccessible at MSNBC.com. 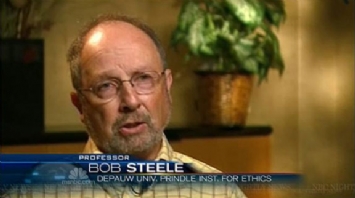 In yesterday's Wall Street Journal, a report by Jessica E. Vascellaro noted, "Bob Steele, the director of the Prindle Institute for Ethics at DePauw University, said that if WikiLeaks founders are fashioning themselves as journalists, they should be more open and transparent about their methods."

A 1969 graduate of DePauw, Robert M. Steele spent nearly two decades on the faculty of The Poynter Institute for Media Studies developing and leading seminars. Regularly quoted in news stories on issues of journalism ethics, Steele was most recently called upon by CNN for comments nine days ago.