August 10, 2010, Greencastle, Ind. — Rebecca Skloot, announced earlier today as a fall visitor to DePauw University, is the recipient of a 2010 Heartland Prize from the Chicago Tribune.  The newspaper today named Skloot the non-fiction winner for her book, The Immortal Life of Henrietta Lacks.

Skloot will come to DePauw on September 9 as a guest of the Timothy and Sharon Ubben Lecture Series.  Her book is currently #7 on the New York Times' hardcover non-fiction bestseller list.

E.O. Wilson was today announced as the 2010 Heartland Prize winner for fiction for Anthill.  Dr. Wilson delivered an Ubben Lecture at DePauw on November 8, 2006. 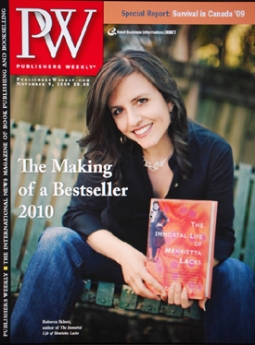 Playwright Sam Shepard is the winner of the 2010 Chicago Tribune Literary Prize for lifetime achievement.

The awards will be presented to Skloot, Wilson and Shepard November 13 at the Chicago Humanities Festival.

Rebecca Skloot's September 9 speech at DePauw will take place at 7:30 p.m. in Moore Theatre, Green Center for the Performing Arts.  Like all Ubben Lectures, the program is presented free of admission charge and is open to the public. Further details can be found by clicking here.

To view a complete roster of all previous Ubben Lecturers -- which includes links to video clips and news stories -- click here.