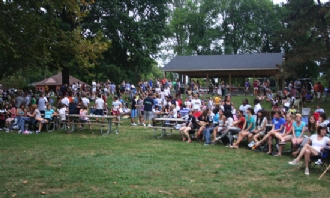 August 25, 2010, Greencastle, Ind. — An event that combined DePauw University's first-year student orientation with community events is characterized as "an overwhelming success" in today's edition of the Banner-Graphic. In recent years, freshmen had an evening event in downtown Greencastle, where they were introduced to local businesses and attractions.  This year, the student event was rechristened "Destination Greencastle" and moved to Robe-Ann Park, where the new students mingled with local residents gathered for a concert and the farmer's market.  More than two dozen area businesses and non-profit organizations also were represented.

"We had over 25 businesses sign up. We had to turn a few 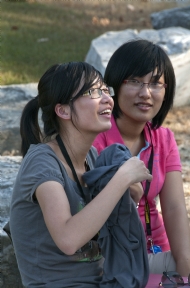 away because they didn't have enough space," Amor tells the newspaper. "I was really excited. To be honest, I wasn't sure if I would get that kind of response, but we have."

"We have done it down on the square for the five or six years, so we thought this might be a new opportunity," Julia Sutherlin, director of student life, tells the Banner-Graphic. "Some of the businesses that have been involved in the past on the square are here as well, but we have been able to involve businesses that wanted to be a part of the event in the past, but weren't on the square. We've been able to involve and expand it a little bit."