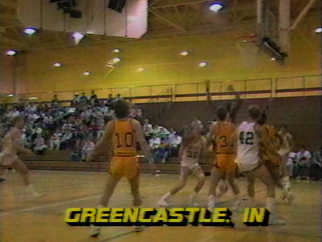 March 3, 1987, Greencastle, Ind. — "DePauw, out of Greencastle, Indiana, has much more than athletes," ESPN's Tim Brando announced as he introduced a story tonight. "They truly have the scholars that academicians like at their University."

The Tigers were the subject of a feature which aired during halftime of tonight's Temple-St. Joseph's game on the cable sports network.

"For the last 4 seasons the Tigers have been ranked in the NCAA's Division III top ten poll," Kevin Madden noted in the report. "They're looking for their fourth straight postseason tourney invite from the NCAA, not bad for a school that stresses books, not bounce passes. More impressive is their work in the classroom.  For the eleventh consecutive semester the team has averaged a 3.0 on a 4-point scale.  Four of the five starters have a 3.3 cume average." 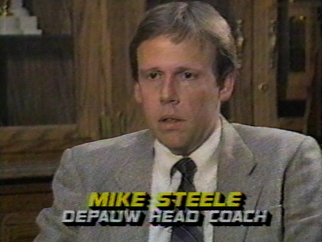 The story includes interviews with David Greiwe, Scott Lewis, and Mike Steele, the head coach of the Tigers.  It points out that the Tigers won 61 home games in a row before a recent loss to IUPUI (Indiana University - Purdue University at Indianapolis).