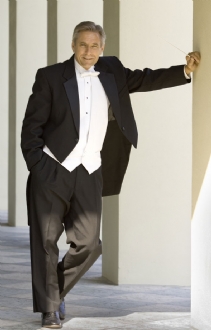 September 10, 2010, Greencastle, Ind. — A familiar professor and musician returns to the DePauw University School of Music next week as David Ott arrives Monday, September 13, for a two-day residency.  A noted composer and pianist, Ott served on the DePauw faculty from 1982 to 1998. His return visit to campus 2010 will culminate with a concert at 7:30 p.m. Tuesday, September 14, in Thompson Recital Hall of DePauw's Green Center for the Performing Arts. The program will feature Ott's 24 Preludes for Piano.

David Ott ranks among the most prominent of the post-World War II American composers. His works include symphonies, an opera (The Widow's Lantern), and children's music, and have been performed by performed and recorded by some of the most notable orchestras in the United States and Europe. He has been nominated for the Pulitzer Prize in Music four times and has received two Grammy nominations. He has been named Symphony Composer of the Year, the premier award presented annually by the Lancaster Symphony of Pennsylvania. Dr. Ott was the winner of the 2003 Music Alive Award, a prestigious national award co-sponsored by the American Symphony Orchestra League and Meet the Composer.

During his residency at DePauw, Dr. Ott will work with student composers.

Ott was born in Crystal Falls, Michigan, and spent his youth in Janesville, Wisconsin. He completed his undergraduate studies at the University of Wisconsin-Platteville in 1969. His master's degree in piano performance was earned at Indiana University in 1971 and he received his doctorate in music theory and composition at the University of Kentucky in 1982. He was appointed the Pace Eminent Scholar at the University of West Florida in 2002-03. Besides DePauw, Ott has held teaching appointments at Houghton College, and Pfeiffer College. From 1991 to 1997 he served as composer-in-residence of the Indianapolis Symphony Orchestra.

Tuesday's concert has no admission charge and all are welcome to attend.

The DePauw University School of Music is one of the oldest private institutions for post-secondary music instruction in the United States. Visit it online by clicking here.

Learn more about David Ott in this previous article.