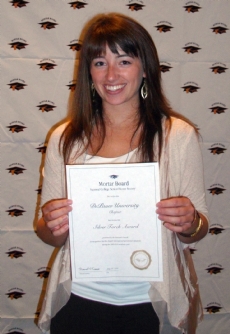 August 5, 2010, Greencastle, Ind. — The Mortar Board chapter at DePauw University is among the most outstanding in the nation. The DePauw group was one of 77 chapters to receive the Silver Torch Award, presented to chapters meeting chapter management standards while exemplifying the ideals of scholarship, leadership and service.

The award was presented at the 2010 Mortar Board National Conference, held July 23-25 in Chicago. Kelsey Miller '11 (seen in top photo), DePauw's chapter president, was present to accept the honor.

Mortar Board is the premier national honor society recognizing college seniors for outstanding achievement in scholarship, leadership and service. Since its founding in 1918, the organization has grown from the four founding chapters to 228 chartered collegiate chapters with nearly a quarter of a million initiated members across the nation. The Mortar Board chapter at DePauw University was chartered in 1919 and currently has 39 members.

Mortar Board provides opportunities for continued leadership development, promotes service to colleges and universities and encourages lifelong contributions to the global community. Some notable Mortar Board members include former Secretary of State Condoleezza Rice and 2010 Super Bowl MVP Drew Brees.

Learn more about Mortar Board by clicking here.