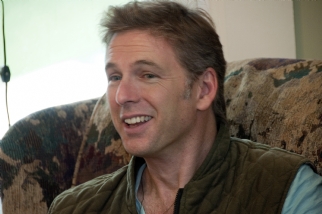 October 1, 2010, Greencastle, Ind. — Wallace J. Nichols, noted marine biologist and 1989 graduate of DePauw University, will be among the featured speakers at the 2010 Adventure Travel World Summit.  The event will take place October 4-7 in Aviemore, Scotland.  Hosted by the Adventure Travel Trade Association, the summit is expected to attract more than 600 delegates from around the world. Dr. Nichols will discuss "From Armageddon to Utopia ... Business as Unusual."

Nichols, who goes by his middle initial, is a research associate with the California Academy of Sciences and founder/co-director of Ocean Revolution. He is responsible for pioneering research on the migration of sea turtles. His work has been featured in National Geographic, Scientific American, TIME and Newsweek, and he was seen in Leonardo DiCaprio's documentary, The 11th Hour. He returned to DePauw on May 23 to deliver the principal address to the University's Class of 2010, "You Are Lovers and Fighters," and is back on campus this week participating in his alma mater's annual "Peace Camp."

Learn more about J. Nichols in this recent article.