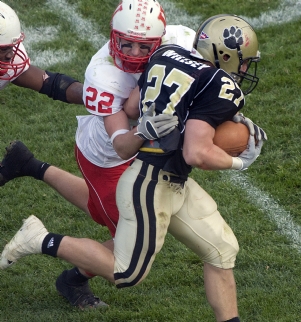 October 12, 2010, Greencastle, Ind. — DePauw University football fans who plan to make the trip to Wabash College for the 2010 Monon Bell Classic can begin purchasing their tickets on Monday, October 25.  DePauw's allotment of tickets will go on sale that morning at 8:30. Kickoff for the 117th meeting between the two schools and the 79th for possession of the Monon Bell is set for just after 1 p.m. (EST) on Saturday, November 13, in Crawfordsville. 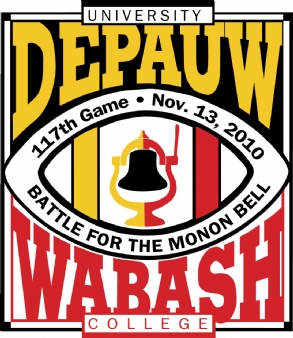 may be purchased online with a credit card here. A $1 service charge will be added to each order and there's a limit of eight tickets per order. There will be no in-person or phone sales and all sales through DePauw are for seating on the DePauw side only.

The rivalry is one of college football's oldest and closest. Wabash leads the all-time series 54-53-9, while DePauw leads in games played for the Monon Bell by a 37-35-6 count.

"The Monon Bell Game has grown in popularity over the years and the demand for tickets continues to grow as well," says Page Cotton, director of athletics at DePauw. "I encourage DePauw fans to purchase their tickets as early as possible."

For the fourth consecutive year, the DePauw-Wabash game will be nationally televised by HDNet. Learn more about the telecast in this previous story.

The Monon Bell was voted Indiana's best college sports rivalry by fans of ESPN, and is noted in the DVD collection, ESPNU Honor Roll: The Best of College Football, as one of the nation's best annual clashes. Past games have been televised on ESPN2 and ABC, and the Monon Bell was featured on CBS' Sunday Morning and has twice been spotlighted in Sports Illustrated. The annual DePauw-Wabash clash is also detailed in Rites of Autumn: The Story of College Football, a book by Richard Whittingham.

Alumni, parents and friends of the two colleges will gather in cities across the nation for telecast parties on game day.

Pre-orders are now being accepted for the 2010 Monon Bell DVD.  Learn more here. DVDs of 2001-09 Monon Bell Classics are still available in limited quantities. An online order form can be accessed by clicking here.