November 6, 2010, Greencastle, Ind. — "Campaign contributions are a form of activism, said Bob Steele, the director of the Prindle Institute for Ethics at DePauw University," notes a New York Times story. The article by Brian Stelter and Bill Carter details MSNBC's decision to suspend anchor Keith Olbermann after learning he made campaign contributions to three Democrats, a violation of network policy. (at left: Professor Steele; below right: Keith Olbermann)

"When a journalist becomes an activist, the principle of independence is not just eroding, it’s corroding from within," Dr. Steele tells the Times.  He is Phyllis W. Nicholas Director of DePauw's Janet Prindle Institute for Ethics and the University's Distinguished Visiting Professor of Journalism Ethics.

The full story can be found at the newspaper's Web site. 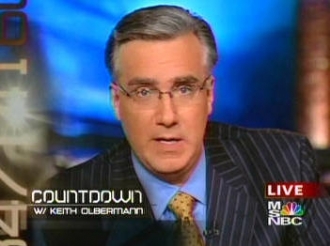 A 1969 graduate of DePauw, Robert M. Steele is one of the nation's leading media ethicists and also serves as the Nelson Poynter Scholar for Journalism Values at the Poynter Institute in St. Petersburg, Florida. In September, he was quoted in a widely distributed Associated Press story on the problems sometimes posed by anonymous online comments posted at websites of news organizations.

Professor Steele was recently named a Fellow of the Society of Professional Journalists, the highest honor SPJ bestows upon a journalist for extraordinary contributions to the profession.