November 22, 2010, Greencastle, Ind. — "Mitch Strobl, a DePauw University biology student and a writer for Huntinglife.com, said one of the reasons deer accidents are so prevalent right now is because the deer are in their mating season, which is called the rut," notes a story published today in Greencastle's Banner-Graphic. The article by Josh Garvey examines the increase in accidents involving deer and automobiles that happens at this time each year. 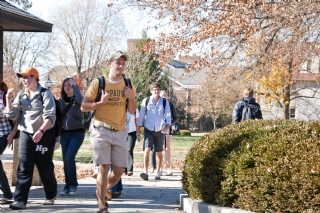 Strobl tells the newspaper, "Basically the estrus cycle has recurring physiologic changes that are the result of reproductive hormones. They're in heat right now. This only happens a couple of weeks during the year."

Strobl was recently featured in a story which was carried by the Wall Street Journal and other oulets, which examined how individuals are using social media tools to link with employers.  Learn more here.