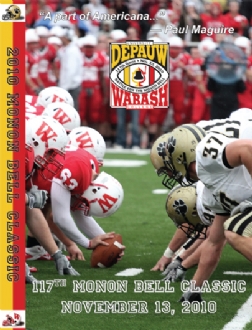 December 7, 2010, Greencastle, Ind. — The commemorative DVD of the 117th Monon Bell Classic arrived from the factory today and will begin shipping immediately. Only 300 discs have been professionally replicated; each college will have 150 to distribute and much of DePauw's stock is spoken for by individuals who pre-ordered the DVD. (at left: front cover of the 2010 DVD)

The discs are $15 each. A $4 shipping and handling charge will be added to each order, regardless of size, as well as 7% sales tax to orders shipped within Indiana. Orders can be placed via this link.

Also available are the DVDs of the 2001-09 Monon Bell Classics (supplies of past games are extremely limited; the 2008 package is a two-disc set including all 115 "Monon Memories" produced to that date). Discs of the 1977 and 1994 games were also produced. 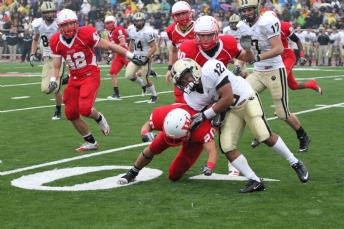 It's the tenth consecutive year that a limited edition, commemorative DVD has been manufactured for fans the annual game between DePauw University and Wabash College.  The two schools collaborate on the project, with Ken Owen '82, DePauw's executive director of media relations, mastering the disc, and Jim Amidon, director of public affairs and marketing at Wabash, contributing the art for the packaging as well as creating the disc menus. 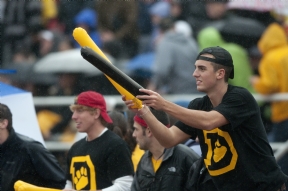 Read about the 117th Monon Bell Classic in this summary. A photo/audio montage of the 2010 game is currently featured on NCAA.com.

A complete roster of "Monon Memories" -- 116 video highlights of all the past games -- can be found here.