Diet for a Small Planet Author to Keynote Symposium, 'You Gonna Eat That?'

January 11, 2011, Greencastle, Ind. — Frances Moore Lappé, award-winning author of Diet for a Small Planet and co-founder of Small Planet Institute, will come to DePauw University to keynote a two-day symposium.  The public is invited to the event, "You Gonna Eat That? The Ethics and Economics of Food Choices," which will take place February 23-24, 2011.

Lappé will speak Wednesday, February 23, at 7:30 p.m. in the ballroom of the Memorial Student Union Building. Her presentation is free and open to all.

Lappé has authored 18 books. First published in 1971, Diet for a Small Planet has sold 3 million copies. Other titles include World Hunger: 12 Myths and Democracy's Edge: Choosing to Save Our Country by Bringing Democracy to Life. 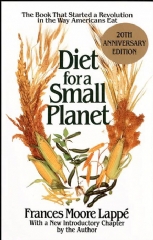 appé is the co-founder of three organizations, including Food First: The Institute for Food and Development, Small Planet Institute and Small Planet Fund. In 1987, she  received the Right Livelihood Award "for revealing the political and economic causes of world hunger and how citizens can help to remedy them." Lappé is also the recipient of seventeen honorary doctorates.

Details of the two-day symposium are still being finalized.  Check the website of the Janet Prindle Institute for Ethics for updates.

Support for the symposium is provided by DePauw’s grant from The Andrew W. Mellon Foundation in support of environmental education and by the Prindle Institute. The Mellon grant is intended to help DePauw enhance course offerings in environmental studies. Read more here.