After DePauw, Commander Luckhaupt went on to earn her medical degree from Ohio State University "and joined the CDC as an epidemic intelligence service officer in 2006. After finishing the EIS program, she remained with the surveillance branch as a medical officer in the Public Health Service Corps. She also received a 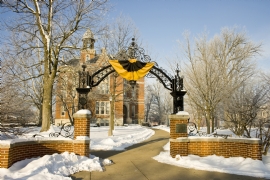 master’s degree in public health from the University of Michigan."

The piece notes that Luckhaupt has created a coloring book titled "The ABCs of Good Health" and "was deployed with the USPHS aboard the Navy ship USS Boxer in 2008. Her team provided health care and education to 25,000 civilians in Guatemala, El Salvador and Peru. Her job involves doing epidemiological research to study work-related illnesses and injuries."