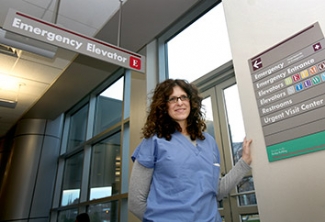 November 28, 2010, Greencastle, Ind. — Jen Pasko, a fourth year medical student and 2006 graduate of DePauw University, is featured in an Indianapolis Business Journal article examining the aspirations of local med school students. Pasko, who says she has a creative personality, is eyeing a career in general surgery, with a concentration on breast surgeries. (photo: Perry Reichanadter/IBJ)

"It embodies the art of medicine and all aspects of medicine," she said.

The piece notes, "Pasko, a graduate of DePauw University, entered medical school intent on a career in geriatrics. But she ultimately decided her talents might be better suited for surgery. A desire for a faster-paced environment helped sway her decision, as well. The same reasons led her to never really give family medicine serious consideration. Yet, Pasko’s emergency room clerkship at Wishard Hospital has given her a firsthand view of the scores of patients who come into the ER and have no family doctor."