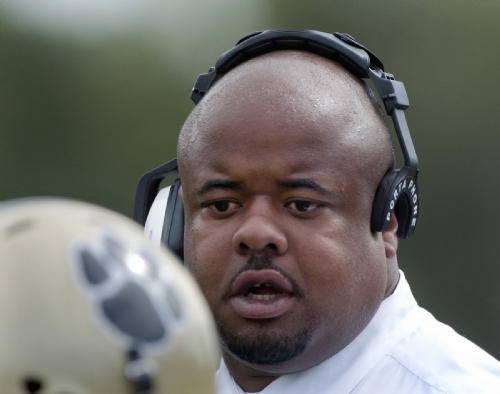 In voting by the conference's head coaches, Long (left) was named the SCAC Coach of the Year for the second straight year and is the first coach to earn the distinction in consecutive years since Trinity's Steve Mohr did so in 2001 and 2002. Long collected five votes in the balloting

In his second year as the Tigers' head coach, Long led DePauw to a 9-2 season including the program's fourth SCAC title overall and first outright championship. He also directed the Tigers to the only two NCAA Championship appearances in school history. In two seasons, his teams have posted a 16-5 record. 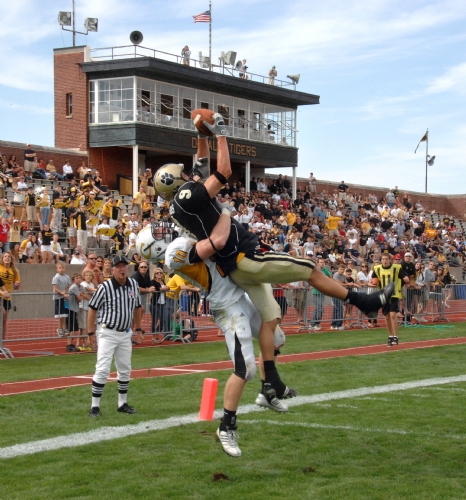 Koors (right) became the first receiver in conference history to earn SCAC Offensive Player of the Year accolades in back-to-back seasons as he totaled five votes. He finished the season with 86 catches for 1,255 yards and 16 touchdowns. Koors was just two catches shy of the school's single-season mark of 88 catches held by John Stephens (2001) and only 11 receiving yards short of his own record of 1,266 set last year. The 16 touchdown receptions broke the DePauw record previously held by Dan Ryan (2002).

Koors also established DePauw and SCAC career records for receptions (255), receiving yards (3,850) and receiving touchdowns (42). He was a first team selection each of the last two years and honorable mention as a freshman. He caught at least one touchdown pass in 10 of the 11 games this year and hauled in at least one reception in a school-record 40 straight games.

Brown and Kreuzman anchored an offensive line which allowed just 10 sacks all season and helped the offense match the single-season school record with 4,299 total yards and 255 first downs. Brown was also a first team choice in 2009. Dahlstrom caught 73 passes for 767 yards and four touchdowns with at least four catches in each game this season.

Doane, who earned second team honors each of the last two years, was fifth on the team with 40 tackles and was tied for second with 10.0 tackles for losses of 38 yards. His 5.0 sacks for 25 yards led the 2010 squad. Fultz totaled 24 tackles including 10 for losses of 36 yards. He was second with 4.5 sacks for 23 yards on the way to earning his first all-conference selection.

Senior tackle Sean Wooding was named to the second team offense as was senior wide receiver Nate Evans and senior running back Derrick Karazsia. Karazsia earned honorable mention in 2009, while Wooding and Evans are first-time honorees.