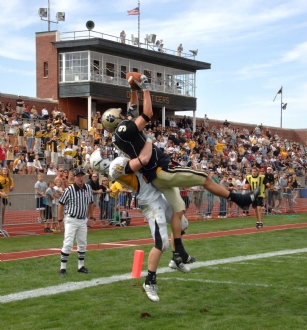 The Southern Collegiate Athletic Conference Offensive Player of the Year for a second straight year and a second team D3football.com All-South Region choice this year, Koors is the first DePauw player to earn the AFCA distinction since JaMarcus Shephard did so in 2004. He was one of two receivers chosen to the team.

Koors finished the season with 86 catches for 1,255 yards and 16 touchdowns. He was just two catches shy of the school's single-season mark of 88 catches held by John Stephens (2001) and only 11 receiving yards short of his own record of 1,266 set last year. The 16 touchdown receptions broke the DePauw record previously held by Dan Ryan (2002).

He also established DePauw and SCAC career records for receptions (255), receiving yards (3,850) and receiving touchdowns (42). He was a first team selection each of the last two years and honorable mention as a freshman. He caught at least one touchdown pass in 10 of the 11 games this year and hauled in at least one reception in a school-record 40 straight games.

DePauw finished the season with a 9-2 record after opening with a school-record nine straight wins to start the season. The Tigers captured their fourth SCAC title including their second straight and the program's only outright title.