December 14, 2010, Greencastle, Ind. —  A Washington Post listing of 2010's "surprising leaders" includes the seven members of the American Energy Innovation Council, one of whom is Tim Solso, chairman and chief executive officer of Cummins Inc. and 1969 graduate of DePauw University. The AEIC "was first announced in a late April op-ed written by Bill Gates and Chad Holliday, and comprises seven corporate titans," write Joe Frontiera and Dan Leidl. "The council made an initial splash by urging the federal government to triple its investment in clean-energy research and development, immediately advancing its mission to foster growth in American's energy leadership through public funding."

The same column cites Rebecca Skloot, author of The Immortal Life of Henrietta Lacks, who presented an Ubben Lecture at DePauw on September 9. "In her biography of the woman behind HeLa cells -- those scientific wonders that have aided with the development of the polio vaccine, groundbreaking cancer research and advancements in in-vitro fertilization -- Skloot tells a human story wrapped in racism, classism and hope," note the writers. "While The Immortal Life of Henrietta Lacks may be regarded as one of the finest reads of 2010 (it's even being made into an HBO film by Oprah), Skloot herself shares an interesting story of 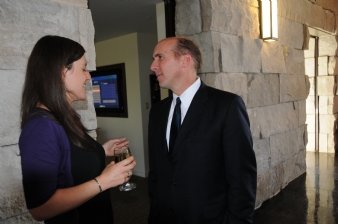 persistence, compassion and dedication. Tinkering on the project for years after first being inspired in high school, Skloot never abandoned her goal of finishing the book. Often writing in solitude in a cabin in West Virginia, Skloot's efforts seem more akin to giving birth than simply putting pen to paper. And as if her persistent efforts to simply complete the project weren't enough, Skloot worked to establish a scholarship fund for Lacks's heirs, a testament to her compassion for the story she chronicled and the relationships she developed with the people she captured in print." (at right: Skloot and DePauw President Brian Casey at the Prindle Institute for Ethics)

Solso, a former member of DePauw's Board of Trustees, is one of five finalists for MarketWatch's "CEO of the Decade." Read more here.

A summary of Skloot's speech at DePauw can be accessed here.