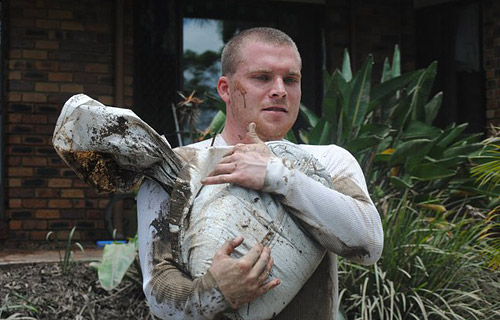 Juniors Margaret “Maggie” C. Erzinger and Christopher L. Forbringer were just finishing their first week in Australia. They had reunited with their old friend and roommate, Alex Jacques, whose family was hosting them and whose father ran the Brisbane home loans company where they were interning. After spending their first days on the job easing into their responsibilities, they headed south for a weekend on the Gold Coast, Australia’s Fort Lauderdale. As far as Winter Terms go, things couldn’t be better.

Then the rain hit, and the water began to rise.

The tropical cyclone that came ashore over northern Queensland in late December was the beginning of three weeks of torrential rain, an “inland tsunami” that continued south with more force than anybody expected.

“Our first week there, we weren’t worried,” Erzinger says. “There was a weather map that showed where the flooding was supposed to be, and it was supposed to miss where we were. It ended up hitting us pretty hard.” 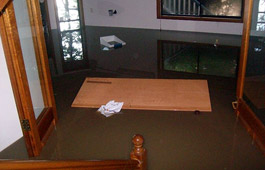 In Toowoomba, a small city 80 miles west of Brisbane, six inches of rain fell in only 36 hours, sparking flash floods that caught people in their homes by surprise. The floodwaters then raced east toward the coast – and Brisbane.

With Queensland in a state of emergency and major roads closed for travel, Erzinger and Forbringer’s two-day stay on the Gold Coast stretched into a week. They ate ramen and grilled cheese from a nearby convenience store, and they kept their stateside friends and family informed with a borrowed iPhone.

“After packing clothes for a two-day trip, it was like going to camp again,” Forbringer says.

It was Spartan living, but nothing compared to what they found when they returned to Brisbane. By then, the waters had receded, leaving behind a thick layer of mud, sewage and dead animals in the middle of the southern hemisphere’s summer. It was clear that that their internships were over and the flood relief work had just begun.

“We walked through the door, found the oldest clothes we could, and started cleaning,” Forbringer says. “The smell – I’ll never forget it. It was the grossest thing I’ve ever done. Everything was brown and soaked. It was awful.” 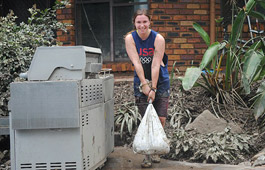 The creek behind the Jacques family home had swelled to nearly 20 feet deep at the height of the flood. Built on a slope, only the bottom floor of the home had been completely underwater, but few others were as lucky. Theirs was just one of 20,000 Brisbane homes inundated by the flood.

Everywhere they went, Erzinger and Forbringer saw people beginning the same rebuilding process, and those who hadn’t been directly impacted were also doing what they could to help. With power outages in many parts of the city, some were helping to direct traffic. One man even drove from house to house at the end of each day to offer cold beer to exhausted workers.

“Complete strangers were coming over with food or offering places to shower and sleep,” Erzinger recalls. “Everybody was pitching in.”

The two students spent the remainder of their trip cleaning mud, tearing down drywall and removing refuse from homes. Shortly after dropping them off at the airport to return home, Kathy Jacques, Alex’s mother, sat down to write a message to DePauw President Brian W. Casey.

In it, she wrote of Erzinger and Forbringer, “The dignity and professionalism shown by these two young people, coupled with their compassion and hard work, has shown them to be outstanding young contributors to our society. They set about helping local residents rebuild and restore their shattered homes with a wonderful sense of commitment. Their sense of humor was appreciated by all who toiled in the mud alongside them.” 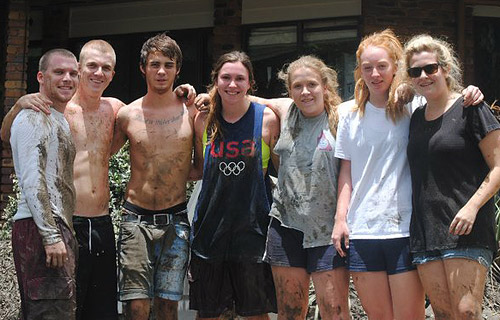 “The way they threw themselves into this thankless – and smelly – task, alongside all the locals, was inspirational, and I believed it was worthy of recognition,” she says of her urge to relate their efforts.

“There is still a lot of work to be done,” she adds. “Whole communities were wiped out. The rebuilding of our state will be a long and arduous process.”

Back in Greencastle, Forbringer is now working with his fraternity, Alpha Tau Omega, to raise money for flood relief for the Jacques family and their community.

Asked whether they would have made the trip had they known what they were in for, neither of the accidental volunteers hesitates to answer. “It wasn’t the experience we signed up for, but it was one worth having,” Forbringer says.

Donations to Alpha Tau Omega's flood recovery fund can be made by contacting Charles "Chip" Johnson '11 at charlesjohnson_2011@depauw.edu.